A water installation and a booklet of rain diaries, created together with Ana Mrovlje. The diaries contain some writings about rain while the installation produces artificial rain. Both of these were developed simultaneously and are intended to be experienced together. The installation provides a physical representation for the abstract ideas contained in the diaries.

We met with Ana in summer of 2017 and immediately discovered that we share many common interests in the domains of spirituality and art. Thus it was very natural to agree to create a work of art together. After an initial period of bouncing ideas back and forth, we agreed to concentrate on the element water, specifically rain water. As I was living in Finland and she in Slovenia, the process was necessarily a slow one. Over period of months, we introduced and discarded many ideas, retaining only what we both found meaningful and inspiring.

Agreement to produce a machine that creates circles on water was found early on. The initial plan called for a single drop hitting a circular pool of water, resulting in a curious phenomenon of symmetry. We proceeded to experiment in several sessions we had in Avtonomna Tovarna Rog in Ljubljana, invited as resident artists by Fransisco Tomsich.

As ofter happens, the machine grew with experiments. We went from one drop to four, then to seven and finally to 19 drops, placed in symmetric hexagonal formation and timed to produce different patterns. We opted for a fixed sequence of predefined patterns, selecting the patterns based on aesthetic merit and their strength as symbols.

Development was greatly helped by the smart decision to implement a simulator that allowed us to easily try out different configurations. The simulator is written in Processing and is available in GitHub repository rain_circle_simulator. 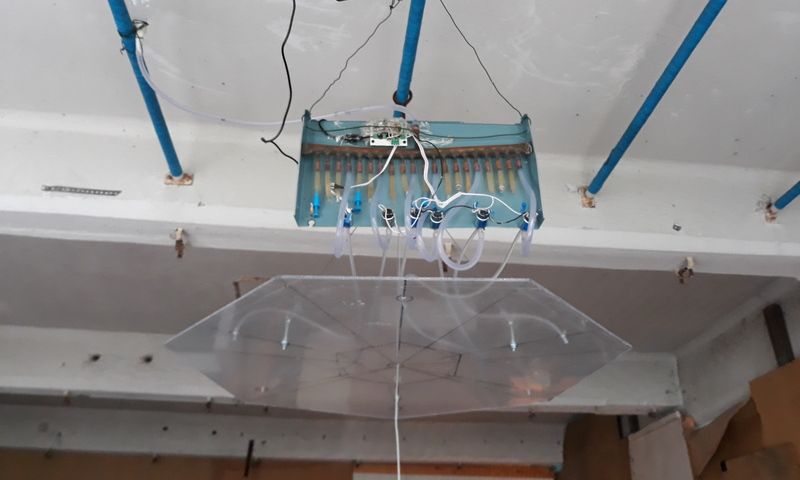 Technically speaking, the drops are formed by electric valves managed by a microcontroller. Water comes from a bucket that is stored close to the ceiling, is distributed to 19 valves, then to 19 open ended tubes which are carefully arranged and positioned above a black, circular pool.

It was quite amazing to discover that even a long stretch of tube, open at one end, will hold water as long as the valve in the other end is tightly closed. Moreover, will release a drop of water as soon as the valve is opened — all the worry about having to carefully match the valve opening times to tube lengths turned out to be completely unneeded.

The electronics are well documented in my GitHub repository drop-machine-2. Unfortunately my standards for documenting mechanical and construction is not on par with the electronics documentation, so it is not available. 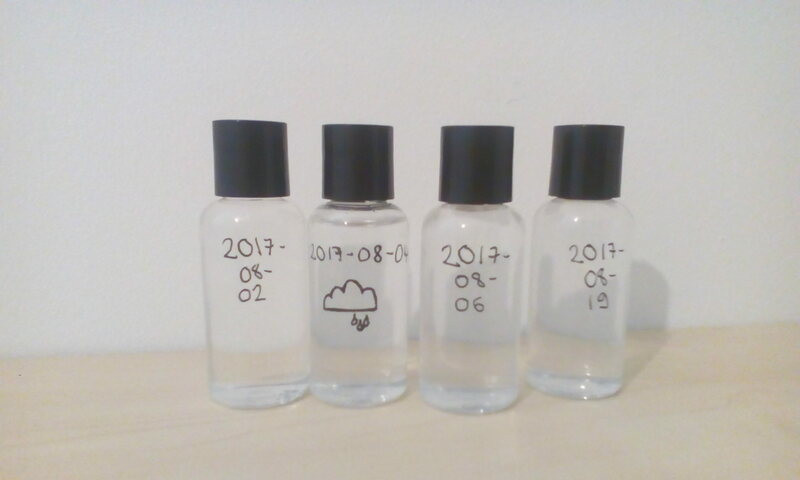 Concurrently with the construction work, we worked on the rain diaries. The initial idea was to expose ourselved to rain when possible, then immediately afterwards write about the experience. These rain walks developed into a method where the walker collected the rain water they were exposed to and gave it to the other. The other would then consume a drop of the water and also write about what ensued. Our hypothesis was that the rainwater itself carries the experience it evokes and that it would show in the writings.

In total we collected 12 days of rain and wrote 12 pairs of rain walks and consumption notes, as we came to call them. These were edited into booklet form, of which some copies were printed. 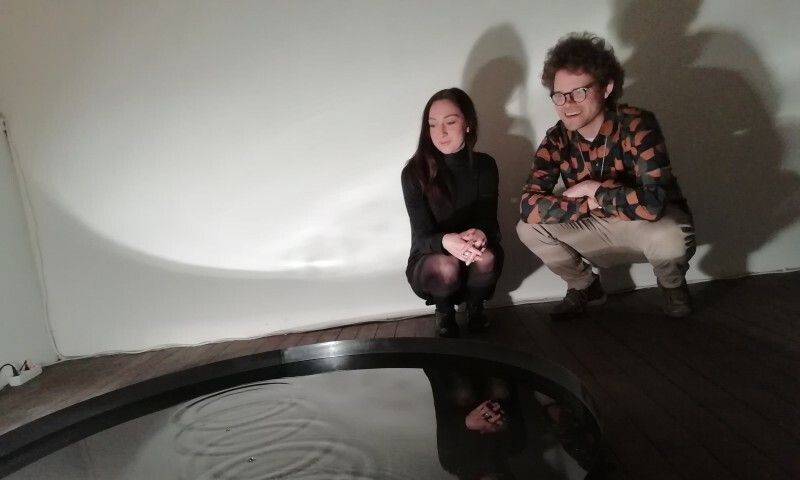 The drop machine and the rain diaries were coupled together by associating each entry in the diaries with a specific pattern from the machine. Images of the patterns were included in the Rain Diaries. When the work was exhibited, both the diaries and the machine were put in the same space, so that gallerygoers could meditate on the topic of rain by simultaneously viewing both.

We also made a web site for the project, also based on the idea of simultaneous viewing. As a stand-in for the machine we used an animation developed from the simulator. Furthermore, we took footage of the patterns and made an “inverted” video work of them, to be displayed together with the machine as yet another variation of the theme.

As above, so below was first exhibited in Myymälä2, Helsinki in March 2019. Auxiliary program included guided rain walks to let visitors experience the same rain walking method we used, and musical performances by Suva, Samuli Sailo and Aqua Sum, a new group we formed with Anna-Mari Otavainen and Eva Kaven specifically for the event.

In November 2019, a second exhibition was held in Modul gallery of Kersnikova Institute, Ljubljana, this time under the name Dežni dnevniki / Rain diaries. Exhibition also included an anotherinstance of the guided rain walk. The Modul exhibition a small detail of adjusting the light and thus the reflection of the water surface on the wall by use of a distance sensor reacting to visitors. Technical details can be found in GitHub repository rain-diaries-light-controller.